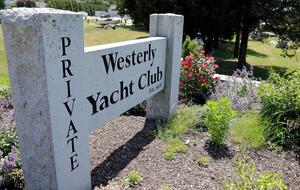 WESTERLY, R.I. (AP) — Taylor Swift has a home in this seaside community. But even one of the world’s most famous women wouldn’t be able to join the Westerly Yacht Club, which bestows full membership only on men.

June 22, 2016A vote to change the policy at the nearly century-old club in the Ocean State, where the love of sailing runs deep, failed to reach a two-thirds majority last week. In a secret ballot, 207 men voted for the change and 171 men voted to keep it the way it is.
Wives can become associate members, and while they can run committees and organize parties at the club, they can’t vote. Single women and married lesbians are not admitted, even as associates, because they are not married to a man. Gay men may join, but their husbands may not become associates, a status reserved for wives.

Women, and many men, are not happy. Several women connected to the club said it was ridiculous, in a year when Hillary Clinton is making a historic run for president, that they can’t join. Swift hasn’t asked, but if she wanted to would not be allowed, even though her beach house is in the same ZIP code.

“How do I explain this to my daughters? That you can be the president, but you can’t be a member of the Westerly Yacht Club?” said associate member Danielle Hetu. Hetu and her husband, who sits on the club’s board, are among those who have been working for years to change the policy. Previous votes to admit women have won a majority but failed to win a two-thirds majority, as required by the club’s bylaws, members said…

HWH response: Many wives told their husbands to vote no, because they didn’t want single women in the club cavorting with their husbands when they weren’t there. Sad, but true. Women will compromise their own rights to keep their husbands (they think) from straying – not that a private club ever stopped anything untoward from occurring. Private parties where wives are not invited often include call girls.

And what weak men would vote against rights of all women just because their wives told them to do it? Guilty men. It’s all somewhat sick – on both sides. Better that they open-air the whole system and make equal the membership. Equal power eliminates the prejudice, not necessarily the bad behavior.

Restricting some women from  men-only clubs does not eliminate adultery or infidelities among couples.

Shame on everybody here, including the single women who want to conquer married men – in other words take from other women their pride. That’s sick too.