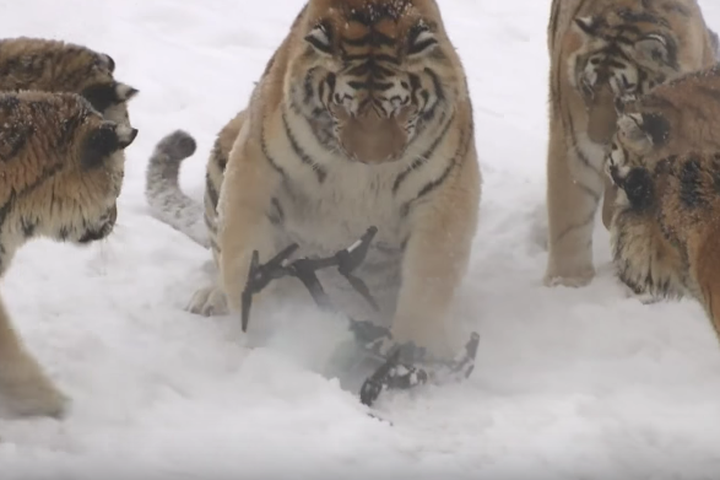 A video of “chubby” Siberian tigers taking down a drone, complete with a silly soundtrack — like so much viral content — is more than what it seems.

While the video’s been shared far and wide, but the origins of the footage have been a cause for concern for a while now.

SEE ALSO: Watch a bunch of chubby tigers take down a drone and try to eat it

While the name of the park isn’t mentioned in the description of the videos (as to avoid searching of the park’s record according to Platt,) the location is.

Heilongjiang Province in China is the home of Harbin Siberian Tiger Park. It’s one of the two biggest tiger-breeding facilities in the country, according to a 2013 report on the country’s clandestine tiger trade by the Environmental Investigation Agency.

The park is advertised as a tourist attraction, where visitors can offer meat and even live animals, to the tigers.

As per a report by McClatchy, the number of visitors doesn’t cover the cost of feeding or breeding hundreds of tigers each year. The real money comes from the sale of tiger pelts, tiger bone wine, and other products that have been banned in China.

Finish reading: Video of ‘chubby’ tigers taking down a drone may be way darker than you think

HWH COMMENT: The dark side is the live animal feeds.

What kind of person can do that? Carry a live, breathing, feeling animal into a tourist attraction park and throw him/her to the lions for the sole purpose of watching an animal tear apart and eat another animal live? They’re not there out of compassion for their hunger. The tigers are obese. They want to keep the tigers wild, barbaric like them. Otherwise they’d feed them bagged food. They tried to eat the drone, so that’s proof that they’ll eat just about anything. Feed them soy meat. China’s rich, they can afford it. Chinese and other Asian Orientals want to experience horror, while they stay safe from it – that’s the attraction.

A scary person, with a scary mind, that’s the kind of person who can do that. Scarier is a country that allows it. Scarier than that is a country of like-minded people. A barbaric country. A country that is numb to the suffering of others. A country that enjoys watching animals suffer is a dangerous collective. And this is the country that said a few days ago that they wanted to be the country that establishes the new world order, with China making the rules. Read about it here: https://qz.com/916382/chinese-president-xi-jinping-has-vowed-to-lead-the-new-world-order/