HWH: Whatever did or didn’t come out of the meeting between President Trump and Mark Zuckerberg, CEO and co-founder of Facebook multibillionaire isn’t as important right now as the fact that the meeting took place and, to the outside observer, appeared cordial and respectful. That’s the way professionals ought to conduct themselves.

That Zuckerberg wants to produce his own currency and essentially become a bank should alarm those concerned about the privacy rights of Facebook users. Banks are meticulous, or should be, in matters of privacy. Mark Zuckerberg hasn’t shown the public to date that he can handle privacy issues with the seriousness they require. Giving advertisers unfettered access to Facebook contacts, private messaging and emails should alarm everybody, friend or foe. He conveniently sidesteps the fact that he’s a multibillionaire because of those practices, and instead focuses on the ‘cost’ of connecting the world, which is supposedly his so-called lofty goal which is the foundation of all of this corruption that made him filthy rich.

Mark Zuckerberg doesn’t have the experience nor track the record in protecting the privacy of his customer base to make a jitter-free business transition from social media to establishing his own currency.

He is jumping too quickly into a banking field he knows little about, before he has adequately dealt with the haphazard way he runs his current companies with little oversight or accountability. Acting naive as he does to the inner workings of Facebook isn’t going to cut it in the banking world. It isn’t enough in that world to operate from an ‘adequate‘ model or from an ‘arrogance’ model that puts everybody but himself in a category of too stupid to understand what he knows and they don’t.

Attempting to connect every individual in the world to each other for his own financial benefit, on the backs of those customers whose privacy he knowingly invades and violates, would land other people committing similar deeds in jail. Others would see him as messianic – king of the world. The only reason I see for doing it, when he isn’t much of a social guy himself, and when the CIA is operating within that system, is for the purpose of spying on the entire world. In other words, it’s a lot easier to spy on individuals who all gather at the same place. They already spy on governments, with individuals it’s not as easy, especially in other countries. And it is costly. Facebook makes it easy.

Protecting a person’s rights against unlawful search and seizure of their personal space and property when executed by advertising agencies for the purpose of profit has not been adequately dealt with by Mr. Zuckerberg, the USA congress or the Supreme Court. We all know what search means, but the seizure definition given by Zuckerberg is not adequate, because it doesn’t fit. When someone copies my private personal material against my knowledge and/or will and then uses it in undisclosed ways for profit, that’s seizure. It doesn’t matter that the original documents remain with the customer, as he claimed. That’s not the point here.

The point is the copying and the usage of those documents which corrupt the originals, since they are no longer free from a corrupt money-making scheme, that could be attached to sex trafficking or drug money laundering or slaughtering animals. Name a money-making scheme or endeavor and your personal information is connected to it via the Madison Avenue Spy And Steal Mode Of Operations For Profit.

What is Madison Avenue paying Facebook customers for that unfettered invasive access and retrieval of their private information? I don’t want MASAS to have access to my mother and her friends and neighbors for the purpose of using their names and everything about them to sell their products or for any other purpose.

Why should MASAS be given authority, that law enforcement or intelligence agencies in the USA have to go to a FISA court to get approved? Why is Facebook immune? Why is MASAS immune? These are all legitimate questions that need answers now.

Yes, FISA WARRANTS FOR PROFIT is what MASAS’s actions amount to. Madison Avenue has a FISA WARRANT FOR PROFIT with no expiration date against every USA citizen and dare I imply every world citizen. No wonder China doesn’t want Facebook in it’s country. Who would, knowing the CIA operates within it. That’s what the CIA does. They spy. They spy and manipulate people.

Zuckerberg’s disclaimers essentially stating that that’s what these advertising companies do, and the customer has to either agree to let them continue or stop using Facebook, when he actively took measures using CIA manipulation tactics, to addict people to the process, is illegal and immoral. It’s communism at it’s height of arrogance.

Breaking and entering is what it’s called, when high-powered technology dives into specifically targeted data, breaching privacy walls. And they always say they’re making your lives easier by bringing to you what you like to buy. I don’t want people to know what I’m buying. I just bought a pair of socks, I go to Facebook to catch up and sock ads pop up all over. Why? I already bought the socks, and Facebook wants me to buy more, even though I can’t afford it? What are they going to do to me if I don’t? Or I talked on the phone regarding socks I need to buy for my husband, I go to Facebook to catch up and ads pop up all over the place regarding socks. Whoa. That is scary.

Let me tell you something. I have never gone to Facebook to shop for anything. I shop where they sell product. That they spy and then show me what they think I want to see does not impress nor help me in any way. It is a huge irritant that they tell me what to buy after I’ve already bought it.

It’s called unlawful search and seizure, because there is no crime committed by the Facebook user. Yet, Facebook is acting like the FBI, combing everybody’s data and using it for who knows what purpose in addition to monetary gain. It’s like absolving a doctor from malpractice claims before the surgery is performed. There may be a law stating it is legal, because corrupt lawmakers passed such a law, but it can’t stand up to constitutional correctness, when someone’s rights for compensatory damages due to negligence or due to purposeful infliction of damage are blocked, thus violated, for the purpose of monetary gain or for the purpose of excusing without consequences negligent behavior, for which other people in similar situations would get prison-time.

Mark Zuckerberg may have the protection of the CIA in his shadowy enterprises that allow him to give MASAS operatives unfettered access to his customers with impunity, but does the world want the CIA to be controlling their banking systems as well? Wherever Facebook goes, there goes the CIA.

Referencing as privacy missteps, the intentional actions by Mark Zuckerberg to allow advertising agencies to search and seize, spy and steal on and from Facebook’s customers is naive and arrogant by those who claim to be concerned about those rights.  In my mind of privacy rights afforded under the USA Constitution, its Amendments and Bill of Rights those missteps are felonies, and Mark Zuckerberg is thumbing his nose to his customers, since those policies are still in practice. What changed is now they admit it and give the customer the option of staying and complying or leaving. All social media platforms do the same. On Word Press, each time you click you have to agree to be used for their purposes or you can’t proceed.

This cannot go on as is. It must be addressed. The advertisers have no inherent right to any of your information that isn’t on public display, and even then everything a person creates is protected by copyright. MASAS operatives totally disregard copyright laws for the purpose of monetary gain using your material in undisclosed ways.

Nancy Pelosi and her gang of violators are naive and arrogant if they think they are above the USA Constitutional authority. Try infringing on one of their copyrighted works and see who’s cringing now.

Facebook’s Zuckerberg had a ‘constructive’ meeting with President Trump

Mark Zuckerberg met with President Donald Trump in Washington, D.C., on Thursday during a trip in which the Facebook CEO aimed to placate lawmakers concerned about the social network’s growing influence and privacy missteps.

A Facebook spokesperson told Digital Trends that Zuckerberg is in the capital to meet with lawmakers “to hear their [and] concerns and talk about future internet regulation,” adding that he had “a good, constructive meeting with President Trump at the White House today.”

At the time of writing, few details about Thursday’s surprise meeting have emerged, though it’s been reported that Dan Scavino, Trump’s social media director, and senior adviser Jared Kushner, were also present.

Trump has been critical of Facebook in the past, though his opinions, more often than not posted online for his 64 million Twitter followers, have usually called out the service for having what he believes to be a bias against conservative voices. One tweet, posted in March 2019, accused not only Facebook, but also Google and Twitter, of being “sooo on the side of the Radical Left Democrats.”

He was also quick to criticize Libra, Facebook’s planned digital currency, saying it would have “little standing or dependability,” while adding that the company would have to seek a banking charter if it wanted to proceed with the idea… 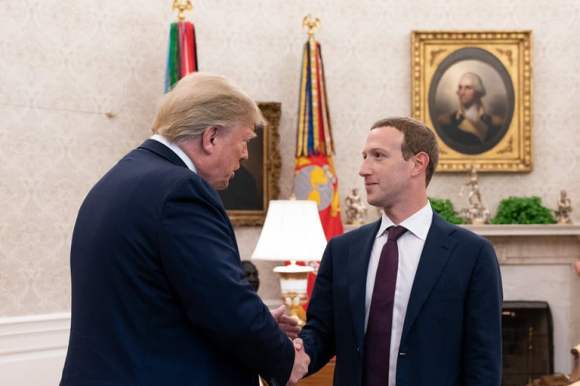