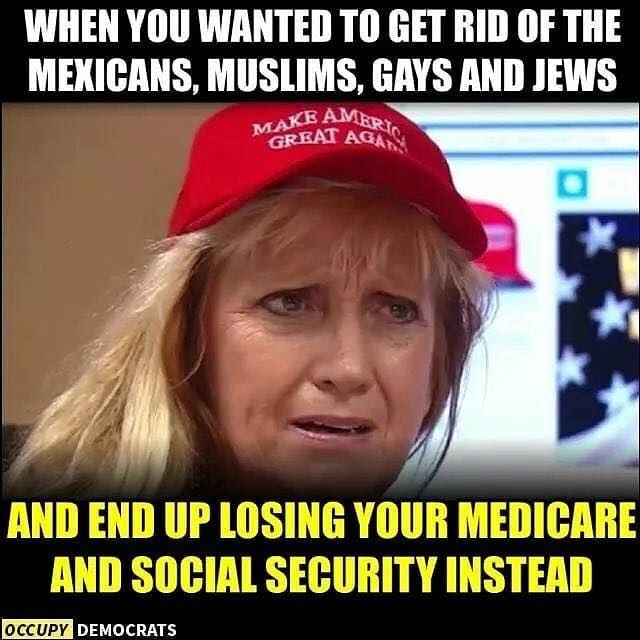 All people need to be represented equally in the political process and given equal access to social services when they qualify.

Laws must apply equally to all people. That includes half the human race – women are the most discriminated against humans on the planet.

It somehow doesn’t look right to blame the woman for the state of affairs of any nation. And then to punish her with loss of benefits because someone didn’t support her freedom to vote for whomever she wanted to vote for? Massive immigration and the cost of free health care, food, housing, clothes, education plus increased funding for those responsible for their care once they cross the border as a result is what drains the budget so that the old white woman who in the 70s fought for all those freedoms for everybody else, gets the shaft.

Yeah, I think that’s ironic. How about fighting for an equal rights amendment for women? Why isn’t there an outrage over women still being forced into subservient roles and jobs? Equal pay for equal work doesn’t exist. But equality doesn’t begin and end there. How about all the women crossing the border? Does anybody really think that they’re going to fight for women’s rights? Not a chance; they’ll set women in this country back instead of move them forward. All they want is the money. They hate Americans and everything else about America. Where’s the money? They essentially get witness protection status upon arriving illegally. Except for the name change, and who really knows about that, since they can’t speak the language, they expect a package – a gift – that includes free rent, food, clothing, healthcare, education, pocket money, job and transportation all for the privilege of gracing this great country with their presence.

There is more to America than Muslims, Mexicans, Gays and Jews. Maybe they should start supporting everybody else, instead of thinking only of themselves. The democrats are taking away that woman’s medicare and social security and giving it via freebies for long periods of time, at least as long as it takes to learn a language in order to get a job and who will baby sit all the born-for-immigration-purposes kids? These people aren’t thinking ahead, only that America will pay for all of it. They have to, otherwise we’ll blow them up and they know it.

The old folks are the ones who always take the hit.

Senior residences are being filled with young immigrants with or without families from all over the globe, while old white people are getting the boot. I live in one of them, so your words about punishing a white woman who exercised her freedoms, hoping finally somebody would help her, falls on deaf years. The democrats didn’t do it, the republicans won’t do it. I voted for Hillary and all her people do is bitch about their right to be uncivilized.

Hey, I don’t give a damn. Nobody’s fighting for the old white woman – not even Hillary or Obama. The #MeToo movement is not a vote for equal rights for women. It trivializes assaults and rapes against women by focusing on decades-old unwanted kisses and grabs and Hollywood people giving blow jobs in exchange for parts in film. How about focusing on what’s happening now?

Nobody wants to stop human trafficking, because it’s intermingled with massive illegal immigration. That will come back to haunt the democrats. They’re already known as the Party Of Slavery, now they want the Party Of Sex Trafficking added to their prospectus. Plus the right to be uncivilized (from Hillary just this morning). Actually it was “you can’t be civil to…” blah blah anything republican was the target.

Hillary doesn’t know how to be civil and sincere at the same time. That’s her flaw. Those government positions were all given to her. But nobody can work with her. She’s too angry – about everything. She pisses people off. She pissed people off all over the world as Secretary Of State, then wanted their support when she ran for president. They didn’t not want her because she was a woman. They didn’t want her because of her stubborn abrasive style. As it turns out, she exhibited the same traits she hated in her father. “He was gruff”. That’s a nice way of saying ‘mean’. Yeah, well you know what Hillary, if you can’t be civil to your opponents, when working in a public capacity, then you don’t have the right temperament for public office.

I never did like that she threw her father under the bus every time she wanted something. It just didn’t seem right. He was her father after all. Obama did the same thing with his father. Bill Clinton did the same with his.

Didn’t anybody ever teach you coping skills? Why didn’t you learn them on your own?

Oh right, ‘stay mad forever’ is easier than looking at your own responsibility to move forward in a positive not destruction motion.

This constant pity-seeking behavior justifying all the wrong moves made at every juncture is not going to put you back into anybody’s good graces.

You didn’t just lose an election, you fell from grace by your own self-destructive design. I voted for who I thought was a strong progressive woman, who as it turns out was a fake. She was only acting the part. She crumbled like an old stale cookie when she lost. That’s on me. I’m just glad you didn’t win. Anybody who takes this long to get over something isn’t suited for public office.

Stop dragging the entire world through your mud. It’s beginning to sound pathological.

In case you don’t know it yet, nobody wants to see you go through psychological therapy in public. I can see that coming.

By the way, what do Jews and Gays have to do with a white woman’s social security and medicare benefits?